There is no point solving one problem only to exacerbate another such as ocean acidity. Whether acidification is a problem or not in relation to Gaia Engineering depends on whether it occurs within or outside the global commons. By the term “global commons” we mean water (the sea) or air. The chemical stability of the commons is essential for all life to continue as we know it and unfortunately the chemistry is changing rapidly. Many life forms will not be able to evolve quickly enough to survive.

The capture of CO2 as carbonate, the only stable form of the gas in the longer term involves the gain or two electrons. Some other chemical species must loose two electrons to maintain electrical balance and as we will demonstrate, it matters what species and whether or not that species is mobile in the global commons.

The solution is to apply the principles of industrial ecology and use as much of the electron deficient species (H+ and NH4+) as possible on land and within our own techno-process (See http://www.tececo.com/definition.techno-process.php) to replace less industrially efficient processes that are outside of the global commons. For example the use of HCl (an acid potentially produced by Gaia Engineering) for extracting metal from ores in such a way as to significantly reduce emissions and thus ocean acidification.

According to a web site titled "The Ocean in a High-CO2 World Ocean Acidification An international science symposium series” [5] maintained by a number of concerned scientists “The ocean absorbs approximately 1/3rd of the CO2 emitted to the atmosphere from the burning of fossil fuels [9]. However, this valuable service comes at a steep ecological cost - the acidification of the ocean. As CO2 dissolves in seawater, the pH of the water decreases, which is called "acidification". Since the beginning of the industrial revolution, ocean pH has dropped globally by approximately 0.1 pH units.

Past and present variability of marine pH. Future predictions for years shown on the right-hand side of the figure are model-derived values based on IPCC mean scenarios. From Pearson and Palmer [8], adapted by Turley et al. [10] and from the Eur-Oceans Fact Sheet No. 7, "Ocean Acidification - the other half of the CO2 problem", May 2007 [1].

While these pH levels are not alarming in themselves, the rate of change is cause for concern. To the best of our knowledge, the ocean has never experienced such a rapid acidification. By the end of this century, if concentrations of CO2 continue to rise exponentially, we may expect to see changes in pH that are three times greater and 100 times faster than those experienced during the transitions from glacial to interglacial periods. Such large changes in ocean pH have probably not been experienced on the planet for the past 21 million years [2]”

Nevertheless an attempt to make the science simple and understandable follows.

A Simple Explanation of Ocean Acidification by CO2:

Consider a Bjerrum plot of the equilibria involved: 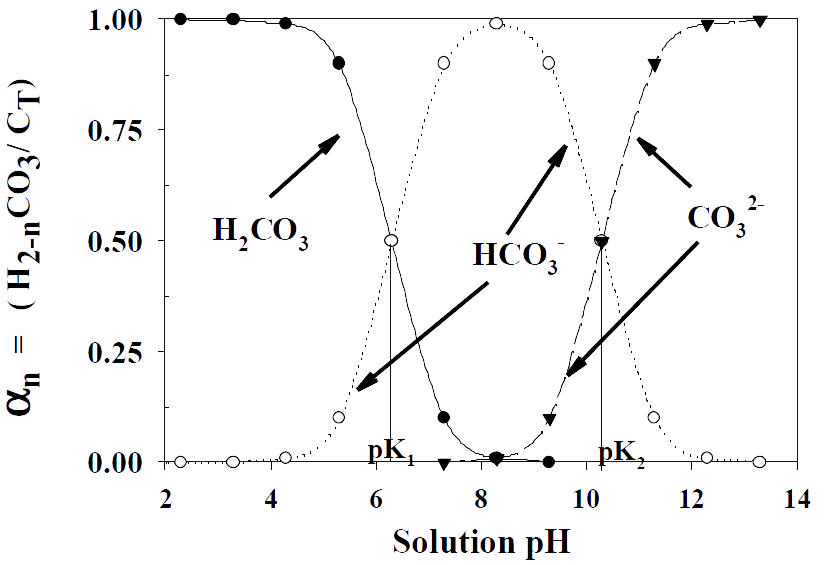 CO2 dissolves in water and some ionizes by interaction with it according to the above equilibria. The easiest way to understand why acidification occurs is to realise that the only way CO2 can become an ion is to accept electrons which results in the production of protons (hydrogen ions) and acidification. If you have ever made a carbonated drink such as soda water with a CO2 "bomb" the tangy taste is the acid produced.

Before the industrial revolution the ocean system was at an overall equilibrium with all CO2 species present, the main ion being HCO3-- and the ocean had a pH of about 8.179. This equilibrium was maintained by weathering of basic rocks with sufficient Mg2+ and Ca2+ entering the oceans to cause precipitation of (Ca/Mg)CO3 to balance volcanic and other CO2 emissions. Since the industrial revolution began excessive CO2 has according to Henry’s and Le Chatelier’s law been dissolving in water and driving the production of more protons and associated HCO3- than can be removed quickly enough by natural processes.

Changes in atmospheric CO2 under the "business as usual" scenario to the year 2100 and associated changes in ocean pH and carbon chemistry. Adapted from Wolf-Gladrow et al., 1999. [11]

Consider the reactions in the N-Mg sub process of Gaia Engineering.

(Note that ammonia complexes may also assist the precipitation of nesquehonite (MgCO3.3H2O). See for example http://www.chemguide.co.uk/inorganic/complexions/aquanh3.html)

There is a market for NH4Cl mainly as a nitrogen fertilizer and we plan to use a variant of the Haber process to produce hydrogen electrolytically and from this manufacture the ammonia required. The market may not be large enough however.

An alternative option is to use our Tec-Kiln to produce reactive magnesia (rMgO) for our cements from the nesquehonite produced and then dissolve the rMgO in a small amount in water to produce Mg(OH)2 which can be used to recover ammonia which can be driven off by heat as in reaction 6.

The ammonia is recycled back into the process.

About 20 million tonnes of hydrochloric acid are currently produced annually by other means less efficient than Gaia Engineering and significant supply is therefore potentially replaceable by our N-Mg sub process with no emissions. As acid extraction processes replace pyro processes for the extraction of metals particularly from lateritic ores with obvious energy and emissions advantages the global requirements for HCl will grow significantly and the use of CO2 producing fuels will decline in proportion.

Acid and Alkali Production in the N-Mg Process

The production of acid is always balanced by the production of alkali. In the case of Gaia Engineering the alkali produced is nesquehonite. We plan to make MgO from it which is an even stronger base.

Gaia Engineering will produce either NH4Cl or HCl depending on final steps in the N-Mg process. Our plan is to sell or use industrially as much of both products as possible to keep them out of the global commons.

The acids associated with the N-Mg process are produced by choice not of necessity. If for example there is a larger market for HCl than NH4Cl in would make sense to produce HCl not NH4Cl. The objective will always be to use the NH4Cl and HCl produced to replace production by other means in a manner which reduces the net effect of emmisons and/or salinity. Should markets for industrial uses of NH4Cl and HCl become oversupplied than because the N-Mg process is on land and it outputs are not released to the global common it is easier to neutralize HCl as there are very large resources of basic igneous rocks such as those containing pyroxene and olivine.

By removing CO2 from the atmosphere uncontrolled acidification of the oceans is reduced propotionally. The products associated with the N-Mg process in an controlled environment are useable in other industrial ecologies and therefore do not represent a problem. Even though acid may optionally be produced it is not in the global commons and can be used to reduce emissions from smelting. CO2 that is removed by Gaia Engineering or not produced because of the ramifications of the technology reduces the global warming and acidification problems.